We were pleased to have been joined by 25 guest lecturers in the spring of 2019 for a series of talks on various topics related to disability and information. Several of these lectures were available to the public, and either recorded or transcribed.  You may access those recordings below. 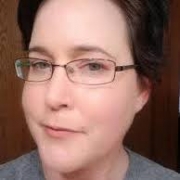 Jessica Schomberg became interested in cataloging in high school, after arguing with the public library cataloger about where the science fiction should be shelved. Jessica currently serves as Media Cataloger and as Library Services Department Chair at Minnesota State University, Mankato. Their educational background includes a MA in English: Teaching English as a Second Language from Minnesota State University, Mankato, and a MLIS from the University of Washington, Seattle. For their disability-related writing, see Inclusivity, Gestalt Principles, and Plain Language in Document Design, Disability at Work: Libraries, Built to Exclude, and My (Library) Life with Invisible Disabilities.

Getting a Word In: Prioritizing Disabled People’s Narratives and Voices 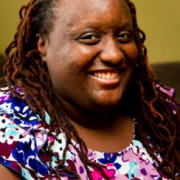 A graduate of Eastern University with a degree in Creative Writing and a minor in French from the Sorbonne, Imani Barbarin writes from the perspective of a black woman with Cerebral Palsy. She specializes in blogging, science fiction and memoir.

Imani BarbarinDirector of Communications and Outreach, Disability Rights, PAhttps://twitter.com/Imani_Barbarin–@Imani_Barbarin
Getting A Word In Transcript

Disability and the Law 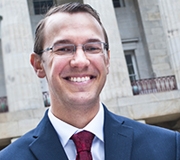 Steve is an attorney who represents local boards of education throughout the state of North Carolina.  His practice is focused on special education law, personnel law, and general litigation defense on behalf of school boards.  He taught middle school before becoming a school lawyer.

Stephen’s presentation focuses on the intersection of disability-related laws and the public education system, with particular focus on the ADA in the personnel context and the IDEA and Section 504 in the student context. 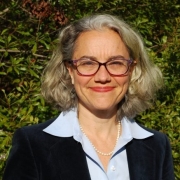 Jennifer is a litigation attorney for Noble Law.  Prior to her time at Noble Law, Jennifer served as a Senior Attorney at Disability Rights NC where she worked for nine years to protect the rights of people with disabilities under the ADA. Jennifer teaches Disability Law as an Adjunct Professor of Law at UNC-Chapel Hill. She frequently lectures and teaches CLE courses on Employment Law topics including: ADA, FLMA, Sexual Harassment, and Ethical Issues in Representing Clients with Disabilities.  She has also served her community, including on the Carrboro Elementary School Improvement Team and on non-profit boards and volunteer committees advocating for racial equity. 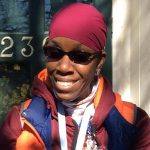 D is an individual with autism who shares her tools for living an independent life with other individuals with autism through guest speaking events at ECU Department of Occupational Therapy, TEACCH, and other programs across North Carolina. She provides personal insight to help professionals understand how to better serve people with disabilities. She has been a Physical Therapist Assistant for more than twenty years and is a provider for in-patient and outpatient care services. She also has served as an adjunct instructor at Craven Community College in its Physical Therapist Assistant Program. D received her bachelor’s degree in psychology from Rutgers University, a second bachelor’s degree in liberal arts science from Neumann College, and her associate’s degree in physical therapy assistance at Union County College.

Matthew is a 21 year old NC native who lives with his parents, two brothers and dog Daisy in Holly Springs. He graduated from HSHS in June 2017 with an occupational course of study diploma. He is currently enrolled in Project Search through Wake Tech, an internship based educational program.

He has worked at the Holly Springs Chick Fil-A for almost 4 years as a dining room host and food runner and volunteer at the Museum of Natural Sciences in Raleigh. He also to volunteers with WCPSS as a high school girls volleyball manager and at 321 Coffee. He is a GiGi’s Playhouse Ambassador co-president on the GiGi’s Youth Advisory Board. He has attended workshops on advocacy, spoken to Governors McCrory and Cooper and is friends with the Mayor of Holly Springs. This summer, he was a paid intern for Rep. John Bradford in the NC State legislature.

He has a girlfriend who he’s been dating for 3 years and they love dinners out, dances and movies. He loves to volunteer, travel and spend time with his family and friends. Matthew wants to live on his own, be self-supporting, get married and have a career as a public speaker. 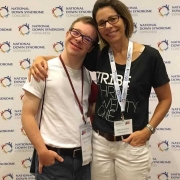 Michelle is a wife and mother of three boys, all of whom are closer to being men than boys. Her oldest is 21 and has Down syndrome.

She has a BSW and worked as a social worker before going back to graduate school to earn an MEd in early childhood education.  She taught 2nd grade in a low-income, multicultural elementary school before having children.

Michelle has been involved with the special needs community since Matthew was born. She helped found the Triangle Down Syndrome Network 20+ years ago and served in a variety of roles over the years. Michelle was part of the start up team for GiGi’s Playhouse Raleigh and serves on the board. 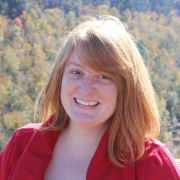 Melissa Green is a Technology Accessibility Specialist with the University of Alabama Faculty Resource Center’s Technology Accessibility team. A teacher, librarian, and technology enthusiast, Melissa helps to ensure that technology users, including those with disabilities, have a functional and accessible technology experience with the university’s web presence and instructional and emerging technologies. Melissa holds an MEd in curriculum and instruction with a concentration in assistive technology from George Mason University and an MLIS from The University of Alabama. Melissa embraces technology’s potential to foster access and inclusion for all, a perspective informed by her work in the disability community, libraries, and information technology. 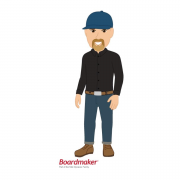 Jim Tignor is a graduate of UNC Chapel Hill from the Department of Occupational Science. For 18 years he worked in the North Carolina Public Schools as an Occupational Therapist, and an Assistive Technology Professional. In 2006 he came to the Chapel Hill Carrboro City school district to develop their Assistive Technology Program. Currently he works as an AAC Consultant for Tobii Dynavox. Jim’s driving professional goal has been to explore how technology can increase an individual’s ability to access their life.  Jim is the author of tek-ninja.org, a blog about the intersection of Occupational Therapy, technology, and education. 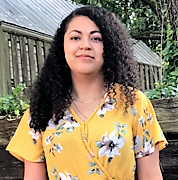 Karen Diaz is a mother of a 10 year old with ADHD and a 6 year old with ASD.  She came to the United States from Mexico 11 years ago.  Karen is also an advocate for parents of children with disabilities.  Through her own experience of looking for appropriate services and resources to fit her children’s needs, Karen has also been able to offer support and advice to families in similar situations and need. 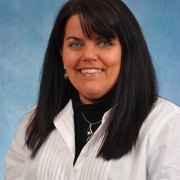 Dr. Karen Erickson is the Director of the Center for Literacy and Disability Studies, a Professor in the Division of Speech and Hearing Sciences, and the Yoder Distinguished Professor in the Department of Allied Health Sciences at the University of North Carolina at Chapel Hill. She is a former teacher whose current research addresses literacy and communication for students with significant disabilities, including complex communication needs. 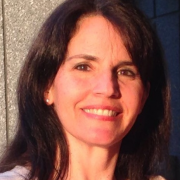 Kim Tizzard has worked for the Autism Society of NC for almost 15 years. In that time she has worked with well over 1,000 families regarding a variety of concerns including school issues, crisis situations and developing positive strategies to overcome challenges in a variety of settings. In addition to her personal experience as the mother of a son with autism, Ms. Tizzard currently serves as the Director of Family Support. In her currently role, she supports Autism Resource Specialist and Chapters across the State.

She advocates for a blended approach in teaching individuals with autism and understands the importance of structure for learning, attending, and independent skills. Ms. Tizzard has also worked as a classroom teacher in a self-contained classroom as well as in regular classrooms where children with disabilities were mainstreamed successfully. 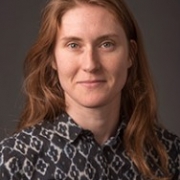 Dr. Stephanie S. Rosen is a librarian scholar who brings insights from disability studies—and its intersections with feminist, queer, and critical race studies—into library administration and digital scholarship. She is Associate Librarian and Accessibility Specialist at the University of Michigan Library and holds a PhD in English from University of Texas at Austin. 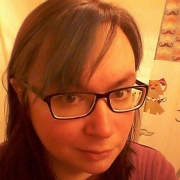 Dr. Kate Deibel earned a PhD in Computer Science from the University of Washington in 2011 with a multidisciplinary study of the social and technological factors that hinder adoption of reading technologies among adults with dyslexia. Currently, she is the Inclusion & Accessibility Librarian at Syracuse University Libraries where she is spearheading multiple efforts to raise inclusion, equity, and disability access throughout libraries and the library community.

Library Guide: “Autistics in the Library: How Libraries Can More Effectively Serve Patrons and Employees on the Spectrum“
Library Services for People with Disabilities Transcript (PDF) 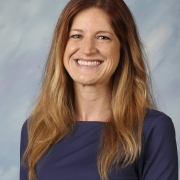 Dr. Amelia Anderson is currently an assistant professor of library science in the Darden College of Education and Professional Studies at Old Dominion University. Her dissertation research focused on how college students on the autism spectrum describe their experiences using academic libraries. Her current projects continue to explore the intersection of neurodiversity and library experiences, particularly for young adults and adults. She previously worked as a public librarian. 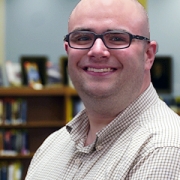 Charlie Remy is the Electronic Resources & Serials Librarian/Associate Professor at the University of Tennessee at Chattanooga. He has a Master’s degree in Library and Information Science from Simmons University and a Bachelor’s in Spanish and Gender Studies from Elon University. His research interests include autism and libraries as well as various aspects of the electronic resources lifecycle. 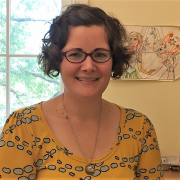